Marriage and the Eucharist 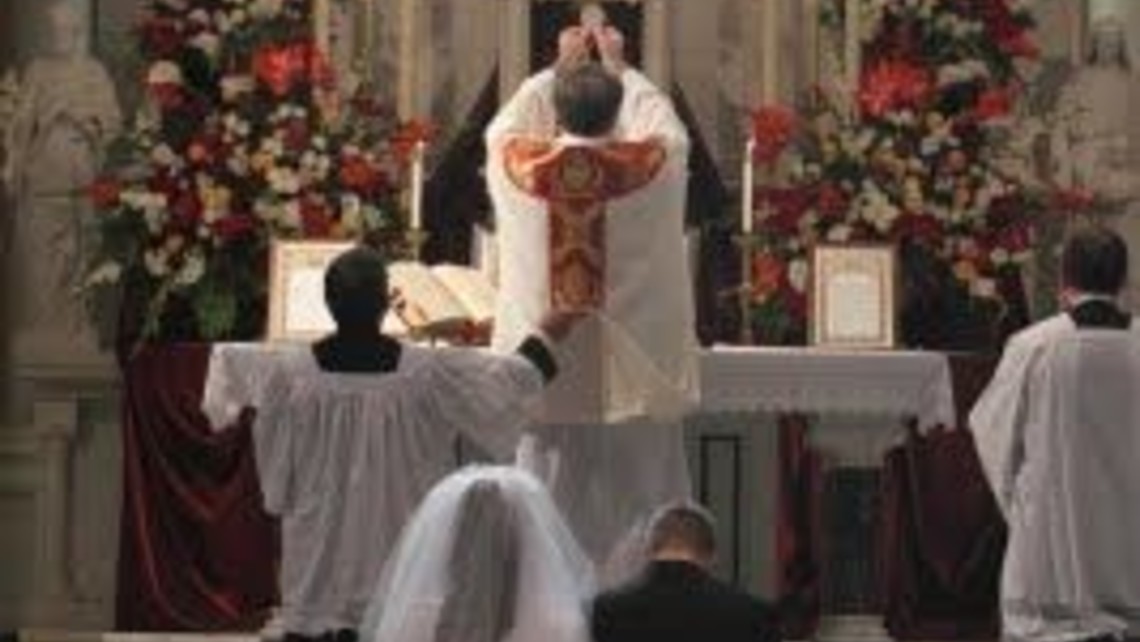 The Great Mystery and the Eucharist

The intimate connection amongst the Cross, Eucharist and Marriage is not at first obvious to most Catholics.  However, the connection begins to become clearer when we recall St. Augustine’s teaching which we discussed above, in which the marriage of Jesus Christ the Bridegroom to His Bride the Church is consummated on the Cross.  Moreover, the Book of Revelation is seen by many theologians as an outline for the celebration of the Mass.  The opening of the seven seals of the scroll by the Lamb Who Appears to be slain represents the movement we now call the Liturgy of the Word.  This liturgical movement prepares for the Wedding Feast of the Lamb at the end of the Book of Revelation, which represents the Liturgy of the Eucharist.  These, of course, are the two main movements comprising the Mass.

This very brief outline provides the basic lines of convergence whereby we can begin to see connection among the Cross, the Eucharist and marriage.  The Cross is Christ’s act of total Self-giving love that consummates His marriage, and thereby saves and transforms His Bride because she really and truly is joined to Him in an unbreakable, one flesh union.  The Mass is the celebration of this one flesh union, but one which makes it present in time.  The one flesh union of husband and wife, is a salvific participation in the one flesh union of the Mass, the Lamb’s wedding feast.  St. Paul suggests a connection between the Eucharist, and especially Holy Communion, and Marriage in his discussion of the Great Mystery in the Epistle to the Ephesians.

St. Paul observes: “For no man ever hates his own flesh, but nourishes and cherishes it, as Christ does the church, because we are members of his body” (Eph 5:29–30).  The early Church saw this passage as a reference to the Eucharist.  Jesus nourishes His Body, the Church, with His own flesh, the Eucharist.  The Eucharist is the ongoing event of intimate communion through which Christ nourishes His Bride, which is also His flesh.  Because the context of the entire passage is the analogy between Christ-Church and husband-wife, we are permitted to see in this also, the necessity of the Eucharist to making the one flesh union of the spouses supernatural.  But at the same time, the Eucharist is the source of supernatural strength for the couples as members of the Church and as spouses who are called to love one another with a heroic, self-giving love.

The Eucharist: The Source of Christian marriage

The Eucharistic Sacrifice represents and brings Christians into a real encounter with Christ's covenant of heroic love with the Church, a covenant which was perfected with the Precious Blood shed from the Cross.  Because the Eucharist makes the power of Cross present in the Mass, it also makes present the consummation of the Old Testament betrothal marriage.  The Eucharist is the source of the power of the Sacrament of Marriage.  This is why the Church teaches that the Christian family's sanctifying role is grounded in Baptism and has its highest expression in the Eucharist, to which, we have seen, Christian marriage is intimately connected.  In the sacrifice of the New and Eternal Covenant, Christian spouses encounter the source from which their own marriage covenant flows, is interiorly structured and is continuously renewed.  Eucharistic devotion therefore, should also be a centerpiece of marital spirituality.

Liturgical celebrations which could be incorporated into family life begin foremost with making an effort to attend a Mass as a family.  Moreover, the family could make an extra effort to attend daily Mass together on some sort of regular basis, perhaps on the first Saturday of the month (maybe even committing to the First Saturday Devotion).  Liturgical observations can also include making a regular commitment to the Exposition and Adoration of the Blessed Sacrament.  Benediction of the Blessed Sacrament is a related liturgical celebration that is often offered when the Blessed Sacrament is reposed after adoration and on First Fridays and First Saturdays of each month.  A once popular devotion, especially among parishes with Italian roots, is the 40 Hours devotion.  Forty Hours commemorates the 40 hours Christ’s body lay in the Tomb.  This devotion usually begins with Mass followed by Exposition of the Blessed Sacrament, and then 40 hours of continuous exposition (though this devotion is not often practiced in dioceses where parishes offer perpetual adoration).  Prayers which the family can adopt which manifest Eucharistic devotion which can be said as a family include the Anima Christi, Pange lingua/Tantum ergo, Adoro te devote, O Salutaris Hostia, Panis angelicus and Ave Verum Corpus.

We recently read a review of Joshua Mitchell’s American Awakening , a book which provides an analysis of the current dysfunction in US... END_OF_DOCUMENT_TOKEN_TO_BE_REPLACED

Another US bishop has reaffirmed that abortion is the pre-eminent issue in the upcoming election in the United States. This past year, the USCCB... END_OF_DOCUMENT_TOKEN_TO_BE_REPLACED

Fr. James Altman's recent video telling Catholics they cannot be Democrats is becoming a point of contention within the Church . It is a... END_OF_DOCUMENT_TOKEN_TO_BE_REPLACED