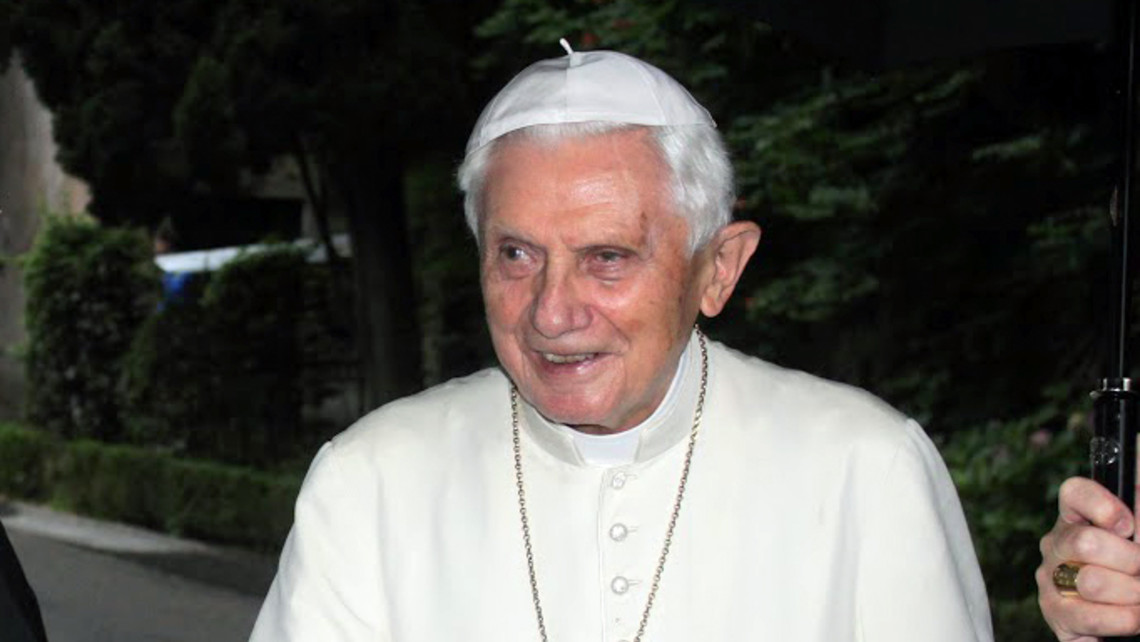 A recent post at the National Catholic Register revealed Pope Emeritus Benedict XVI's thoughts about two opposing ideologies that he believes put the world in danger given the present circumstances.  Benedict's statement is in a brief greeting delivered as a letter to an academic conference in Poland.  The conference met to discuss Pope Benedict XVI's and Pope St. John Paul II's thought with respect to the human person and the State.  A brief reflection on the theological anthropologies of both of these great thinkers and how each's understanding of the human person has necessary implications for the organization of State structures in our contemporary situation, permits us to glean from this brief statement an important challenge for the new evangelization.

Benedict writes to the leaders of the Church in Poland and to Polish government leaders, the following admonition:

The contrast between the concepts of the radically atheistic state and the creation of the radically theocratic state by Muslim movements creates a dangerous situation for our age, one whose effects we experience each day. These radical ideologies require us to urgently develop a convincing concept of the state that will stand up to the confrontation between these challenges and help to overcome it.

The concern he raises is that these two vying, dichotomous trajectories are increasingly being presented as the only two options available.  This false dichotomy leaves one with having to accept the State organized either as governed by a theocratic ideology or with God completely expunged from society.  The present theocratic option manifests itself so clearly as malevolent that only a small minority could possibly see it as reasonable.  The only other option we are left with, according to such thinking, is the Enlightenment's innovation of the "secular" government.  That is, a government in which there is not simply a state structure disentangled from the Church or other religious institution but one which presumes and promotes the naked public square using the language of the late Fr. Richard John Neuhaus.  In other words, today we are headed toward a state and a society in which God is completely exiled from public life.

This atheistic model is increasingly being assumed to be the only reasonable way to govern in a religiously heterogeneous society.  Politically engaged Christians is now forced to argue their case in the public square for policies and/or legislation that conform to Gospel values in terms of these extreme poles.  They inevitably fail when they attempt to claim the authority of Scripture as their premise because only a small portion of the electorate will vote according to such a position.  What the most dogged are reduced to is trying to develop arguments that are "secular," meaning tacitly atheistic.  Some of these Christians are left with a philosophy of government based upon their interpretation of the Bible which cannot be, and often ought not be, implemented.  Other Christians fall into the Enlightenment trap and agree that a tacitly atheistic government in which elected officials rule over the consciences of the masses (if not in such terms) is the only viable option.

A Christian theocracy, especially without universal assent to magisterial authority, is unworkable.  Likewise, the willingness of Christians to leave God completely out of the argument in public debate is wrongheaded because it implicitly chooses the atheistic pole of the false dichotomy.  Any such government will eventually turn against the governed.  If "secular" is to be used licitly, it must mean that one's argument in support of policy or legislation does not rely on adhering to the faith commitment of any particular religion.  What it actually means to most people today is that the argument must steer clear of any implications of the existence of God.  This way of arguing leads to a way of thinking that gives rise the problem Benedict identifies as already existing in some places.

The lessons of history continually reveal there must indeed be a delineation between the City of God and the City of the World, and so the theocratic philosophy, even if Christian, is not a workable option.  This is even more the case in a society that was founded upon the rejection of the Church's teaching authority, replacing it with the interpreting authority of the individual.  Asking the State to adjudicate between competing, personal interpretations of Christian Scripture is indeed a foolish notion.  This approach is doomed to failure and so a validly secular governmental structure is necessary.

Yet, the atheistic option is an even more dangerous path to take.  It is not the neutral position that secularists have led so many of us to assume it is.  Such a God-less position undermines the foundation for natural law and so for human flourishing.  The atheistic State is left to the use of utilitarian considerations as it's guide for establishing the orthodoxy by which its citizens must live and obey.  Such a State will appeal to the good of society for its coercive and ultimately anti-human policies.  Anti-human policies are in fact what Benedict implies we are already experiencing.  Example abound: the obligation to assent and, for many to participate in abortion against one's will; the demand one accept and at times support so-called same sex marriage and other corrupt sex-based ideologies.  In the end, the atheistic State must inevitably make recourse to the use of coercion to enforce its false orthodoxies because defense of false positions cannot succeed through the use of reason.  This is for the simple reason that policies which contradict revealed Christian truths about the dignity of the human person can also be confidently known by reason alone and argued convincingly as such.  The more grave a violation of these truths the atheistic state attempts, the more resistance people of conscience will be forced to employ and the more severe the coercive response of the State will become.

An atheistic State is clearly more of a severe threat of being realized than is an Islamist theocratic State.  Current Islamists's understanding of what the State should be, based upon their interpretation of the Koran, has little chance of gaining sufficient adherents.  What it does do is to push unwitting society toward the thinking that the "secular" (i.e. radically atheistic) State is the only safe option.

These two dichotomous positions are not the only options.  There is a great need for applying the theological anthropologies of Popes St. John Paul II and Benedict XVI to the challenge of developing new state structures permitting a religiously heterogeneous society to live in harmony.  The current polarization and secularization of society already is challenging the US government structure which is based upon the rule of the majority with the cooperation of the minority.  This challenge is not surprising, as even the Deist founding fathers realized that the Christian character of the populace is necessary for democracy to succeed.  The rapid abandonment of Christian moral premises for State legislation and policy is the source of the challenge.  This abandonment is the primary reason our current structure of governing is unable to rise to the task of harmoniously governing our changing, polarized and disharmonious society.  It is a challenge also facing the new evangelization.

The larger problem that must be addressed for the new evangelization is that the rejection of Gospel values by a society makes society increasingly resistant to evangelization.  Moreover, without God, the foundation for arguing any absolute moral values disappears. We must better form the thinking of Christian men and women to understand the distinction between assuming the authority of a particular faith tradition for developing one's arguments for use in the public square and the intellectual illegitimacy of arguing based upon an unstated assumption that God does not exist.  Gospel values can be known and defended by reason alone, as can the existence of God.  Without God there is no foundation for the dignity of the human person and so little chance of envisioning authentic governing structures ordered according to the essence of the human person.  Natural law arguments have their force only when it is clear that they reflect the necessary order of person and society, an order that is possible only when established by a God of Reason.  The more we are immersed in thinking that assumes the atheistic option, the more difficult the challenge of presenting the Gospel will become.

We recently read a review of Joshua Mitchell’s American Awakening , a book which provides an analysis of the current dysfunction in US... END_OF_DOCUMENT_TOKEN_TO_BE_REPLACED

Another US bishop has reaffirmed that abortion is the pre-eminent issue in the upcoming election in the United States. This past year, the USCCB... END_OF_DOCUMENT_TOKEN_TO_BE_REPLACED

Fr. James Altman's recent video telling Catholics they cannot be Democrats is becoming a point of contention within the Church . It is a... END_OF_DOCUMENT_TOKEN_TO_BE_REPLACED