The Virtue of Justice 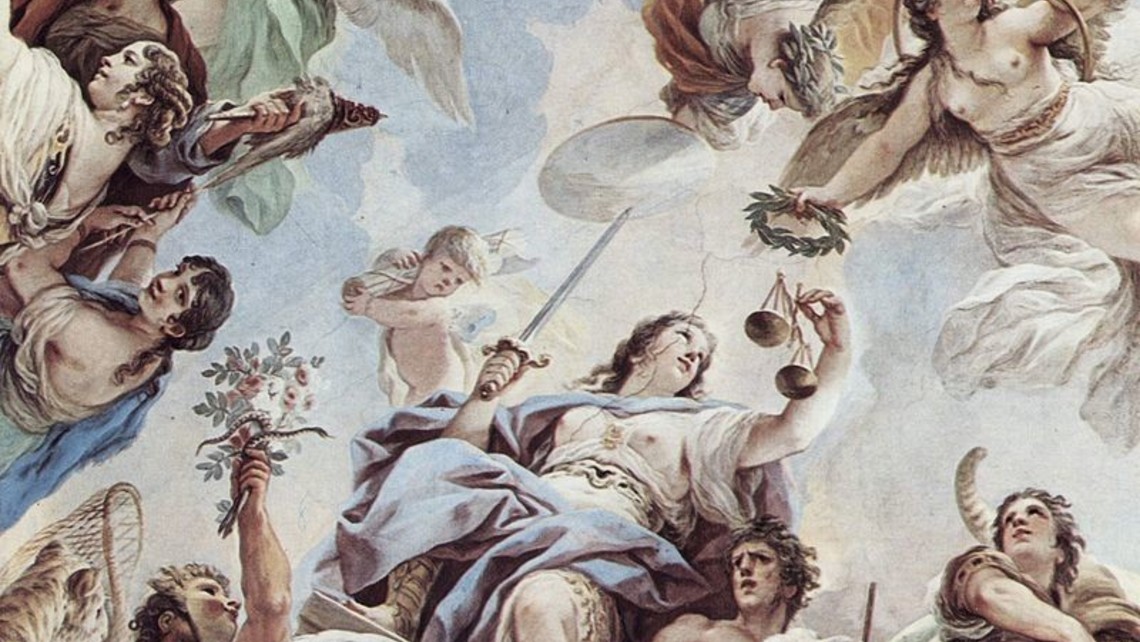 Justice is the habit by which one gives God His due, which is everything.  Giving God what is due to Him includes giving one’s fellow man his due, which is the freedom and opportunity, and assistance when necessary, for integral human flourishing.  Integral human flourishing includes one’s salvation, his perfection in love (holiness), and his intellectual, moral, emotional and bodily flourishing.  Of course, there is a hierarchy of goods here.  If there becomes a conflict among the human goods the spiritual goods must take precedence, but we must also affirm that this does not make any of the lesser goods unimportant.  Justice in our society has become confused because it has been replaced by a misguided rights ideology and mistaken social justice theories whereby rights are arbitrarily demanded irrespective of authentic human or societal goods.  Those reacting against these ideologies sometimes make the opposite mistake when they fail to distinguish truth from error.  If we miss the truths intermixed with error, we will end up throwing the baby out with the bathwater.  The opposing ideology to current errors about social justice is a libertarian and radical individualism.  Authentic justice must avoid actions based upon false ideologies.

Justice is known by means of the natural law and as it is revealed in the Ten Commandments. However, it is also taught in the Beatitudes and the Church’s more in-depth moral and social teaching.  Justice keeps us from doing evil, selfish, sinful acts that damage others as well as ourselves.  It recognizes personal responsibility through subsidiarity, and mutual responsibility for others in fraternal solidarity at the same time.  Solidarity and subsidiarity cannot be separated without annihilating both.  Justice understands a person can become holy only through freedom to choose rightly, through maximizing of his opportunities to contribute to his own, to his neighbors, and to societies needs and to other acts of good.  Justice is not in the mind of the beholder, it is black and white. However, determining what is just in the complexity of the circumstances of life can be a difficult task and this is the job of the virtue of prudence.

How does one build the habit of being just?  By always being just in every circumstance.  To always give God His due and one’s neighbor his due in every circumstance.  The virtue is built by choosing always to do the true, the good and the just, even when no one is looking.  We become just by being just in little things as well as great.  A just person can never make an exception because it is easier, more convenient, advantageous, or for any other reason.  The more grave and the more spiteful the motivation for acting unjustly, the more destructive it is to one’s maturation in the virtue.  As with prudence, justice can also be supernaturally perfected by one’s cooperation with grace.  It can be deepened by one’s union with Christ and by doing acts of love out of a generous and giving heart.  The more one gives himself for the good of others and for the sake of Christ and His Cross, the more one perfects himself in justice.  Natural justice is closely linked to the theological virtue of charity.  This is the reason that the Church teaches there is no tension between justice and mercy (which St. John Paul II calls “love’s second name”).  Charity increases justice, and justice is essential for charity. Justice can also be super-naturalized through infused justice.

An important new book for the new evangelization, written by one of MAI's fellows Keith Lemna PhD, has just been released by Angelico Press.... END_OF_DOCUMENT_TOKEN_TO_BE_REPLACED

We will finish our treatment of the spiritual life with a short series on prayer and we'll begin by definining prayer. Prayer is a... END_OF_DOCUMENT_TOKEN_TO_BE_REPLACED

Let us remind ourselves that one must not over estimate Satan’s power. He has only the amount of control over our lives that we... END_OF_DOCUMENT_TOKEN_TO_BE_REPLACED