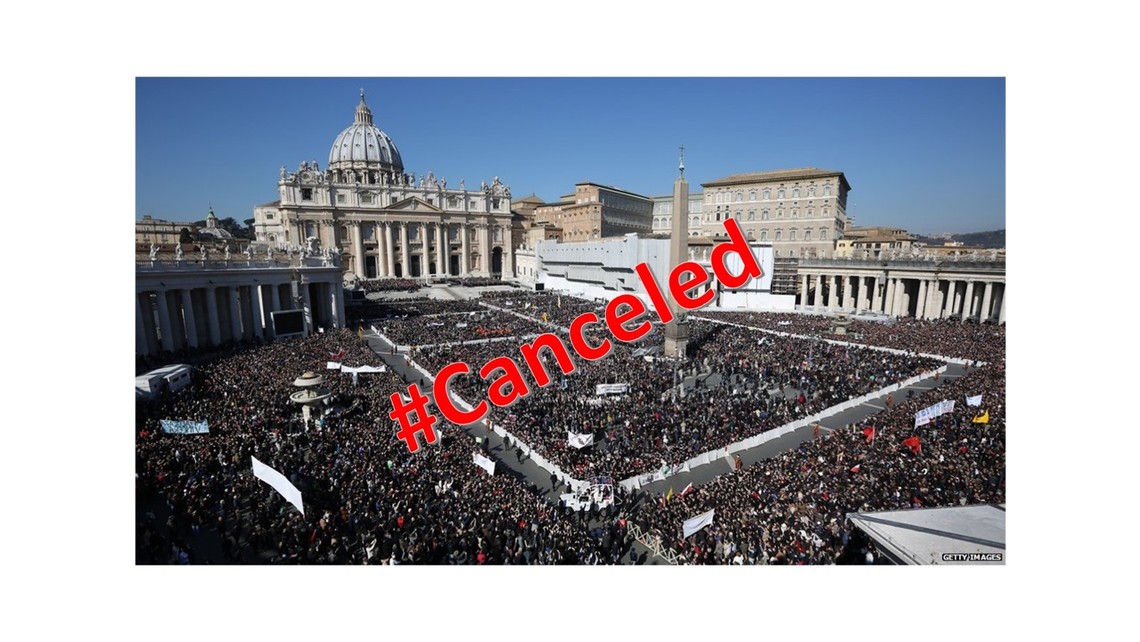 A current great threat to Christian freedom and the social acceptability of Catholics in the West is the so-called Cancel Culture movement. This movement is recent, but its roots are nothing new. It is one of Satan's age old gambits to isolate human beings from others and then to turn us against one another. In this methodology, he wishes to isolate us from the past and so he can cut us off from the wisdom of Catholic culture.  At the same time, he promotes a suspicion of and an animus toward the Catholic Church and Catholics who accept her teachings.  This is his focus because only Catholic culture has brought us the ethos necessary for broad human flourishing as well as the small matter of the salvation of human souls.

The cancel culture mindset has been quite effective in turning the West away from its Catholic ethos. One might say it started in earnest with the Franciscan, William of Ockham who successfully introduced the ideology of temporal snobbery with his false dichotomy between the via antiqua and the via moderna. In his view of the via moderna, everything that came before was suspect because our ancestors just didn't know as much as we do. This idea is seductive because we do in fact gain more knowledge as time goes on. However, there is a logical "sleight of hand" by which knowledge replaces wisdom. While it is possible to grow in wisdom, it is not the case that more knowledge necessarily brings more wisdom. In fact, when we cut ourselves off from the wisdom of the past, we lose it rather than increase in it. This ideology which throws out the lessons of the past moves on from its philosophical focus in Ockham's case, to the rejection of the Catholic foundation of Christianity when the Reformers of the 16th century adopt Ockham's "cancel culture" ideology.

The cancel culture ideology is almost immediately taken up by the Enlightenment thinkers in the 17th century who now apply the ideology to Christianity and even to religion itself. The result is the 18th century French Revolution and its inextricable manifestation in the Reign of Terror. There we saw the attempt to erase everything Christian from culture and to replace it with an explicit worship of man and a reductionist form of human reason.

Today's cancel culture movement is more of the same and so one would expect that the ideology is nothing new to the US.  The anti-Catholic Enlightenment animus increasingly waned in the US after each major war.  However, it only came to an end with the demise of mainline Protestant Christianity in the US by the 1950s.  However, almost immediately this animus is transferred in a new direction.  We saw the seeds of what will become today's anti-Catholic cancel culture movement, grow in the 1950s and break out into social rage from the mid 1960s to the early 1970s. This began as an adolescent rebellion of teenagers against their parents and everything their parents stood for.  The unfortunate thing was that this adolescent rage against societal authority was caught up with a righteous and peaceful movement to overcome racial injustice which had endured in US society even after the emancipation proclamation.

As gains were made in racial justice, the social rage retreated for a while. However, the civil rights movement would morph from matters of authentic justice to the promotion of evils as civil rights, the rage has risen again. And it is here we can most clearly see our demonic conspirator's face appear.  Promotion of abortion and its more subtle chemical cousin--contraception, were successfully framed in terms of women's rights. The promotion of same sex partnerships and the redefinition of human sexuality were "discovered" to be new human rights.  The Catholic Church stands as the only institution which threatens these new rights and so it uniquely must bear the burden of what is to come.  We are seeing new energy in the movement as the social disadvantage of too large a segment of African Americans and its negative consequences in terms of engagement with law enforcement is being used to reignite the widespread rage which had waned by the late 1970s.

The Reformation rebellion against the Catholic Church's authority is transformed by the Enlightenment to a rebellion against all the Catholic Church provided to Western thought. The reason we are seeing cancel culture focus on especially Catholic symbols today is that Satan has done his work in wrapping the via moderna into suspicion of all that came before. It is especially clear that Western culture has flourished because of its Catholic ethos. Therefore, one cannot rebel against the enduring symbols of Western culture without attacking also their Catholic origins.

Unfortunately, the roots of cancel culture have grown deep in society and so its anti-Catholic animus will not easily be overcome. Bishop Baron has an important article illustrating this fact. The only one Who can turn this around is Jesus Christ. The time is now urgent that we transform ourselves if we are to be instruments of Christ in transforming a crumbling, post-Christian society. The world needs to see Christ through each of us. People of good will, will be converted through Christians accepting of this Cross.  If they do not see Christ through us, then they will not be converted.

We suggest to start our individual transformation by accepting a challenge to fast and to pray a Rosary and the Divine Mercy chaplet on Fridays.

We recently read a review of Joshua Mitchell’s American Awakening , a book which provides an analysis of the current dysfunction in US... END_OF_DOCUMENT_TOKEN_TO_BE_REPLACED

Another US bishop has reaffirmed that abortion is the pre-eminent issue in the upcoming election in the United States. This past year, the USCCB... END_OF_DOCUMENT_TOKEN_TO_BE_REPLACED

Fr. James Altman's recent video telling Catholics they cannot be Democrats is becoming a point of contention within the Church . It is a... END_OF_DOCUMENT_TOKEN_TO_BE_REPLACED