Marriage and the Cross 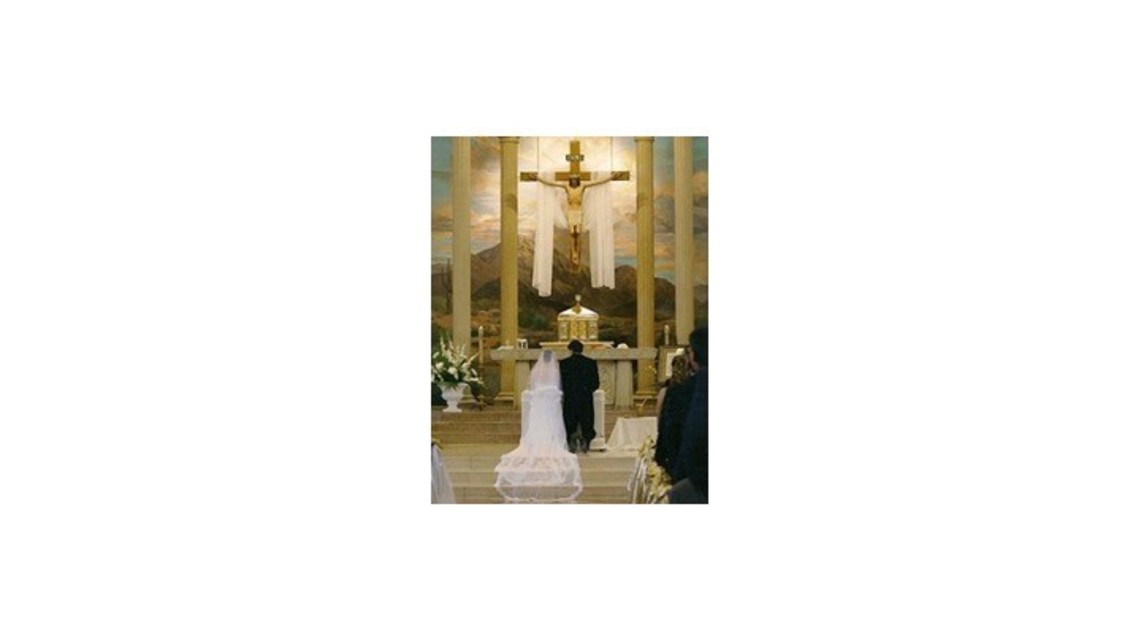 We pick up again our series on covenant spirituality.  A mature theology of marriage must emphasize the intimate relationship between marriage and the Cross.  We may initially sense contradiction here until we recall that the Cross is a sign of contradiction.  In the natural order, it is a sign of horrible torture and unimaginably, agonizing death.  In the world, as God originally created it, the Cross should not exist.  It is precisely opposed to the expression of life giving love which defines the meaning of marriage in the natural order.  However, the world is no longer in the state God created it.  The Cross brings the first, and now broken, creation into a redeeming contact with the new creation (i.e. the Incarnation of the Eternal Son).  This new creation restores man’s lost communion with God when Christ returns Himself totally to the Father, giving up His human life in history’s singular act of redeeming love.  His act of love on the Cross overcomes sin and death because His death was the pathway to communion with the Father, the Source of all life.

The Cross is a sign of contradiction.  In the natural order it is suffering and death, but in the supernatural order it is the doorway to eternal life.  With natural eyes it stands as folly to Gentiles and a stumbling block to Jews (1 Cor 1:23), but with the eyes of faith in Christ it is the witness of undeserved and unimaginable love poured out for sinful man.  St. Augustine’s insight that saw Jesus from the Cross, consummating His betrothal marriage to Israel should be the central image for married spirituality.  The Cross, as St. John Paul II observed, transforms redemptive love into spousal love (Man and Woman He Created Them, trans. Michael Waldstein (Boston, MA: Pauline Books & Media, 2006), 475; General Audience of August 18, 1982, 90:6).  Sacramental marriage is about the spouses loving each other all the way to heaven, through the power of the Cross.  This is St. Paul’s Great Mystery.

The Great Mystery and the Cross

A Christian has been baptized into Christ’s death through His Cross, and thereby has also risen to new life with Him (Rom 6:3-4).  By the Cross we are incorporated into Christ, meaning we are members of His Body and so we are, at the same time, His Bride.  The Cross is at the very heart of the Christian mystery; it turns Satan’s rebellious plan on its head.  It ensures where sin abounds, grace abounds all the more (see Rom 5:20).  The Cross manifests the Son’s eternal, the total self-giving love by which He returns Himself to the Father, and brings the healing effects of this love into our fallen world.  The Cross takes man’s greatest sin and transforms it into an act of obedient, total self-giving love.  The Cross takes what is a sign of death in the natural order, and turns it into the pathway back to the Father.  Jesus instructs His disciples that the Cross must be embraced by all who would be His disciples (see Mt 16:24).  St. Paul goes on to show how taking up one’s Cross also applies, in an even more intimate manner, to marriage in Christ.

Paul joins the Cross to Jesus Christ’s identity as the divine Bridegroom Who saves and sanctifies His Bride, the Church.  He writes “Husbands, love your wives, as Christ loved the Church and gave himself up for her, that he might sanctify her, having cleansed her by the washing of water with the word, that he might present the Church to himself in splendor, without spot or wrinkle or any such thing, that she might be holy and without blemish” (Eph 5:25–27).  Paul says that it is a Great Mystery that Christ made the saving relationship between Him and His Church is the same saving relationship between Christian husband and wife.  Christian mystery has a two-fold connotation.

In the order of knowing, often emphasized in Western theology, mystery indicates an analogy between God’s infinite perfection which can never be exhausted by finite minds (or even directly apprehended this side of the beatific vision), and created realities which have their origin in God.  From this Western perspective, we may say the mystery of the relationship between the Cross and Christian marriage can’t be fully comprehended (i.e. to fit completely it into our finite minds), yet it can be understood (i.e. we can know its meaning and see its reasonableness) more and more deeply.  As spouses contemplate their love for Christ and for one another, especially as their faith in God deepens and their marriage matures, they will come to understand more profoundly the sacrifices they will have to make in life for the sake of love.  And they will more fully understand that these sacrifices, when united with Christ, become redemptive.  In this way, their love will bear more fruit.

Mystery also has a second aspect in the order of love, which is emphasized in the Christian East.  Mystery is a term that refers to the unfathomable unity to which we are invited to have with God in Christ.  Mystery in Eastern Christian theology emphasizes the order of love.  St. Peter reveals the unfathomable depth of this communion of love when he says we become partakers of the divine nature (see 2 Pt 1:4); the Christian East calls this divinization.  The mystery of our ineffable communion with Christ, by means of the Cross, makes our communion with our spouse one that transforms our spousal love into a love that also redeems.  The Great Mystery permits us to participate with the love of Jesus Christ in order to become His co-workers, helping to save and to sanctify one’s spouse.

The Cross and Mutual Sanctification

The mystery of the Cross makes marriage a Sacrament, which is a Great Mystery.  The Cross is the power by which conjugal love, manifested in a special way by the love of the marital act, can be purified of all selfishness and made holy.  It is the act by which Jesus Christ joins Himself to His Church.  His Passion, death and Resurrection makes and sanctifies His Bride.  This beautiful truth is illustrated by St. Augustine’s insight that the consummation of the Lord’s betrothal marriage to His Church took place upon the Cross (see Homilies on the Gospel of John XV.8, CXX.2; see also St. Jerome, Homilies on the Psalms, Hom. 66 on Psalm 88[89]).  The flowing Blood and Water, the signs of the first and last Sacrament of Initiation into the Church, from the side of the “sleeping Second Adam” on the Cross is a mental image of the Great Mystery that spouses should hold dear.

For this reason, the Cross is indeed an apt symbol for marital love.  We might quickly set aside any requisite humor associated with such a symbol, and certainly we need to avoid any negative connotations that might be conjured by comparing marriage to the Cross.  Rather, the Cross needs to be seen first in the context of Jesus’ teaching about the greatest love, which He gave to His disciples as He prepared them for His Passion (see Jn 15:13).  The Cross for Christians has long been the symbol of this greatest love in which the Lover is willing to lay down His life for His loved ones.  In this ineffable act of Jesus’ love, we have the example and the measure of total self-giving love.  Love, in which the Christian is willing to pour out his life for his Beloved in return for the love He has shown us, is the heroic love which the Christian mystic and the Christian martyr long for the grace to experience and which they embrace when the time arrives.  It also exemplifies the heroic love which a young couple feel for each other.

Few Christian spouses will be called upon to shed blood, in a literal way, for Christ or for their spouse.  This dramatic manner of love, in some ways, might be argued to be an easier way to give oneself totally.  This easier path is reflected by one of Flanner O’Connor’s characters who thought she could never be a saint, but if they would kill her quickly she might be able to be a martyr (see A Temple of the Holy Ghost).  While the character’s thought suffers from the limitation that it is blasphemously wrong, it still contains the legitimate insight that endurance in loving heroically over the long haul brings its own great challenges.  Most Christian spouses will experience these challenges.  Consistently and faithfully expressing one’s heroic love for his spouse over a lifetime will see high and low points because of the effects of the Fall.  Indeed, as a purely human task it is an impossible challenge, but success is possible through the power of the Cross.

Spousal love, super-naturalized by the power of the Cross, is the ordinary means of the mutual sanctification of Christian spouses.  Sanctification is the measure to which one has perfected his capacity to love.  In other words, spouses perfect themselves in loving each other and loving others through a mature spiritual life.  However, heroic love through spiritual maturity is only possible for those who take seriously, the spiritual life.

The Great Mystery advises a couple to develop a deep devotion for the Cross.  The Crucified Christ should have a special place in the family’s devotional life.  In general, praying the Rosary together is a good daily, family devotion.  At least praying the Sorrowful Mysteries together on Fridays could be an expression of the family’s devotion to the Crucified Christ.  Other popular devotions which emphasize aspects of the Great Mystery that could be made a regular part of family life include: The Sacred Heart, The Holy Wounds, Stations of the Cross, the Precious Blood, and Divine Mercy.

An important new book for the new evangelization, written by one of MAI's fellows Keith Lemna PhD, has just been released by Angelico Press.... END_OF_DOCUMENT_TOKEN_TO_BE_REPLACED

We will finish our treatment of the spiritual life with a short series on prayer and we'll begin by definining prayer. Prayer is a... END_OF_DOCUMENT_TOKEN_TO_BE_REPLACED

Let us remind ourselves that one must not over estimate Satan’s power. He has only the amount of control over our lives that we... END_OF_DOCUMENT_TOKEN_TO_BE_REPLACED