The Virtue of Prudence 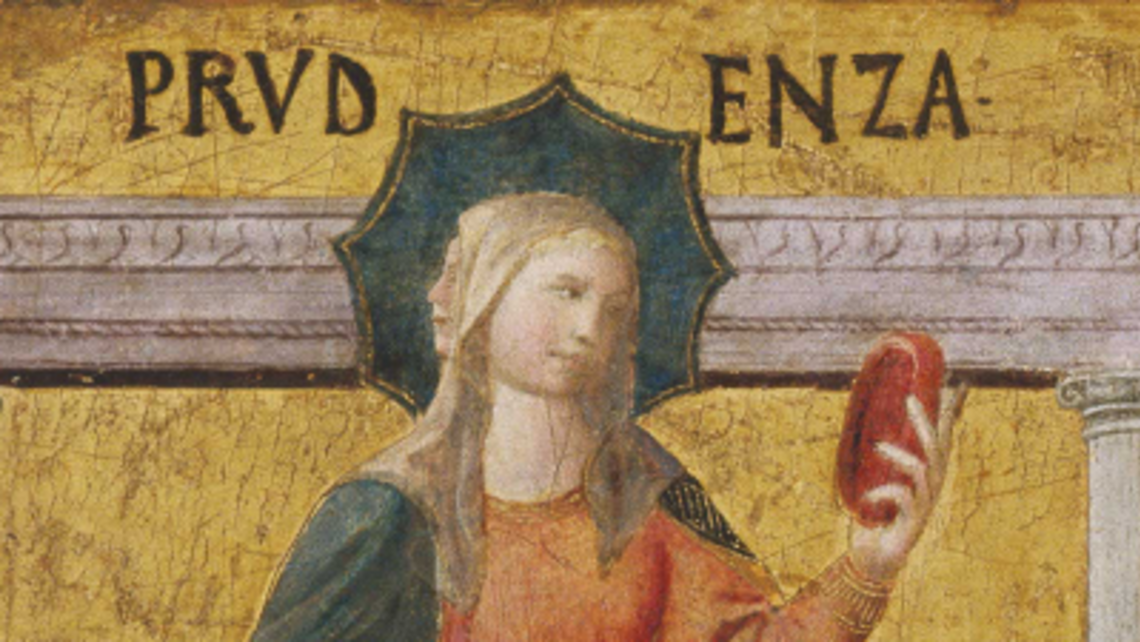 We begin our discussion of the four cardinal virtues.  The first is prudence, which is traditionally called the first of the virtues.  It is first because prudence is always dictated by the truth of the created order and by the truth of the specific circumstances of a choice to be made. Prudence is the habit of knowing how most effectively to attain some authentic good, ordered to the truth. Because every virtue is ordered by truth and by the authentic good, maturing all virtues is dependent upon prudence because it is required for knowing how to effectively pursue them.

Prudence is different from the other three Cardinal Virtues because they are habits of the will, while prudence is a habit in practical knowing.  By practical we simply mean that it is knowing how to do something to bring the good about.  Practical knowing is distinguished from speculative knowing. Speculative knowledge knows the truth and authentic goods by their essence, but it does not know how to do them. So, prudence begins with understanding reality, understanding what the authentic good is based upon the truth of reality/creation, and then seeing how to achieve the good in specific circumstances based upon this truth.  For this reason, we can say that every sin is, in some manner, a violation against the virtue of prudence because sin is rebellion against the truth and the authentically good.

Prudence does not make sense to those who believe that we know what is good only because Christ revealed it to us.  In other words, this mindset declares (or at least assumes) there is nothing about creation and human reason that allow man to discover authentic human goods without the aid of divine revelation.  For such mistaken thinking, we are obligated to act based only upon our duty to obey specific commands from God (and these come solely from His incomprehensible will), usually they assume this is found only in the Bible.  However, for someone to develop prudence, he must understand that creation and moral action are based upon God’s nature as it is reflected in the created order.  Prudence reveals, through the gift of reason, how we must act to conform ourselves with the good that God has created.

There are a couple of mistaken understandings of prudence we should clear up.  First, we must not mistake cowardice for prudence. Moral cowardice often masquerades as prudence, usually with the help of temptation.  Fear is one of Satan’s favorite weapons.  St. Teresa of Avila suggests fear is the lynchpin for all of his other temptations.  When we give in to unreasonable fear, we lose virtue and so we damage our ability for growth in natural virtues and in holiness.  There is no opposition between prudence and fortitude.  Prudence is about seeing the most effective path to acting on truth to pursue the good.  Prudence will help us to see those occasions when we will have to pay a price for acting as we must.  There is not always a consequence free path to doing the right thing.  This virtue cannot be expected to find suffering free pathways to the good when others have effectively closed them.  We need prudence to help us increase our fortitude for such occasions and we need fortitude to help us with prudence.  Prudence helps us to be courageous, but it can help us from going into the opposite vice.  The opposite of cowardice is being foolhardy, which is an excess of fortitude. This mutuality is true among all of the other virtues as well.

Prudence is also often confused with some of its aspects which are necessary for one to be prudent. St. Thomas identifies eight integral aspects of prudence: memory, understanding, docility, shrewd insight, reasoning, foresight, discernment of circumstances and caution.  Of these, shrewdness and caution are the two most common parts that are confused for the whole.  Prudence is much more than simply being cautious and sometimes excess caution can be imprudent (e.g. when one turns to look before following the admonition to duck at a baseball game).  Moreover, a shrewd person who is not guided by understanding what is right and wrong or cannot reason through logical fallacies may still be able to get his way much of the time, but he will not be prudent.

Prudence is built by education in knowing the truth and in doing the good in the right manner.  In as much as it is a natural virtue, human effort alone can result in significant increase in prudence.  However, cooperation with grace permits us to reach a much higher level of perfection than we could attain through our natural efforts alone.  There is also a supernaturally infused prudence which we call the gift of wisdom.  However, let’s first look at how we can develop natural prudence.

Every virtue, as a habit, is developed and perfected by always acting in accordance with the virtue.  Understanding what comprises the virtue of prudence is relatively straight forward. Practicing the virtue is more difficult. One fact that is important to recall is that all of the virtues rise and fall together, and so the other virtues which are more easily practiced can help to build prudence.  One can also build prudence by understanding its component aspects which we previously identified.  Let’s look at some of these in more detail.

The foundation for prudence begins with education in the Church’s teaching about the moral life which includes the 10 Commandments and the Beatitudes.  Without this knowledge, we cannot make the judgments of understanding that are necessary for identifying which options are good and true, and which are not.  We can then work on our ability to make good judgments.  Good judgment comes from always acting in accord with the foundational principles of acting rightly (called the first principles of practical reason).  Most people generally recognize five of these principles.

The first is that we can never do evil that good may come from it.   The second is that we may never treat another person as a means to achieving a desired result.  The third is that we must always treat others as we would treat ourselves in every circumstance.  The fourth states that we ought always to include the good of others in our actions and to allow others to cooperate with us in pursuing the good, when possible. The final principle says that we must never act purely on our emotional state (whether from fear, desire, anger, anxiety, aversion, hostility, etc.), but we must always subject our emotions to the judgment of our intellects before acting.  We should internalize these principle, meditate on their meaning, and then always judge our actions to determine if we are acting in accord with them.

To build prudence, we must also focus on docility and humility.  Our ability to see the truth and how to accomplish it rightly (i.e. to be prudent) requires humility (the ability to see things as they are) and docility.  To be docile means to be teachable, which requires listening.  It requires the humility to be open to the possibilities that some of one’s assumptions may be inadequate or even wrong.  The docile recognize it is possible to be taught truths even by babes who have little lived experience.  Overcoming prideful or prejudicial habits of thinking and acting are central to formation in docility.

Another aspect of prudence about which one might practice is foresight.  Before making a choice, one should develop the habit of thinking through likely consequences of the possible choices and developing the ability to rank the probability of the consequences coming about.  For example, before going out with one’s workmates for a drink after work we need to evaluate whether this would be an authentically good thing to do.  In some cases, it could be required for the sake of one’s career.  However, we should develop the foresight also to see possible negative consequences by, for example, considering how one’s spouse will respond to your coming home late, especially if she has been home all day alone with sick children.  Most husbands should easily be able to foresee that he will disappoint his wife, perhaps unnecessarily increase her stress, and perhaps even introduce avoidable conflict into the relationship.  A man without foresight will never develop prudence and so will regularly be in danger of continual conflict with his spouse.

Discernment of circumstances (or circumspection) is developing the habit of considering the circumstances surrounding a choice to be made.  At times, the pursuit of some particular human good may be unsuitable because of the circumstances.  For example, telling one’s friend a lighthearted joke about a rival college football team’s playing ability may be appropriate in some circumstances, but it may not be such a good idea in the presence of one’s boss who went to that school and has very little sense of humor when it comes to jokes about his team. The fact that one’s boss has the rival team’s logo on his coffee cup should be adequate warning of this possibility.

Natural prudence can be developed by human effort alone but man’s cooperation with grace can help assist him in developing natural prudence to the point of a perfection. Cooperation with grace must also take the form of a contemplative encounter with Jesus Christ.  The more one comes to know Christ in His teaching, in Scripture, and in quiet, contemplative prayer, he increases his capacity for exercising his reason in a humble, attentive, and controlled manner. The more docile he is to Christ’s will and he conforms his will to Christ’s, the more Christ’s life interpenetrates his own.  This permits him to mature supernaturally, his humility, docility and other skills related to prudence.  Prudence is perfected in the man who can see as Christ sees and choose as He wills.  There is also a supernatural prudence, which is called the gift of wisdom.  This gift perfects natural prudence beyond the capacity of the natural virtue.  It is sometimes called infused prudence.

As the world races to find an effective vaccine to defeat the COVID-19 pandemic, and even before we know if we will have a... END_OF_DOCUMENT_TOKEN_TO_BE_REPLACED

The Catechism of the Catholic Church's (CCC) very readable discussion of contemplative prayer should remind us that it is not just for certain temperaments... END_OF_DOCUMENT_TOKEN_TO_BE_REPLACED

A current great threat to Christian freedom and the social acceptability of Catholics in the West is the so-called Cancel Culture movement. This movement... END_OF_DOCUMENT_TOKEN_TO_BE_REPLACED