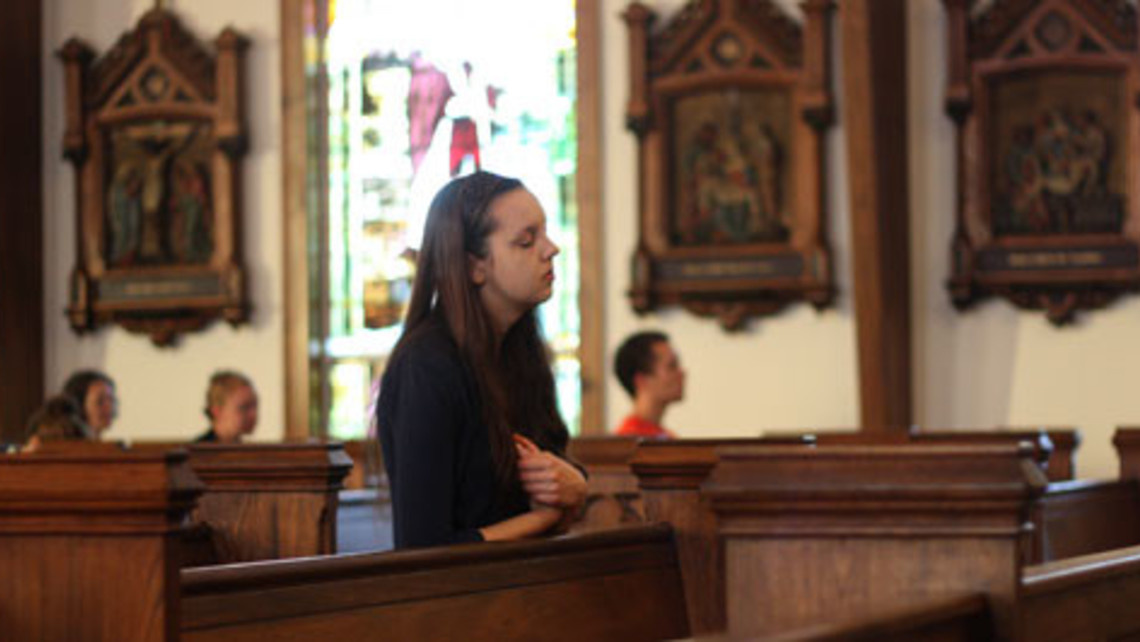 This is the second of a two part segment (see Prayer part I) on prayer within our series on Lent.

The Catechism of the Catholic Church describes first vocal prayer, which is the mode of prayer by which we approach God by talking directly to Him (out loud or interiorly).  However, there are two other expressions of prayer, meditation and contemplation.

Meditation is a search for the meaning of the Christian life and God’s will for us in it.  It has the aim of conforming ourselves to Him and responding to His will.  Meditation is an attentive listening as we consider a particular question.  The CCC suggests many helps to meditation, but one common approach is to meditate on a particular passage of Scripture, especially from the Gospel.  In reality, the vocal prayer and mediation have the same end.  In both, we are entering into an event of communion with God, giving ourselves totally to Him and receiving Him.  Because these approaches wish some particular result (usually our particular petition) which captures our attention, the fact that both of these expressions of prayer are acts of communion is not as apparent.  Contemplative prayer makes the common end of all prayer more evident.

Contemplative prayer is seen by many as a special approach to prayer, to which only some are called.  This is incorrect.  To understand contemplative prayer is to understand all forms and expressions of prayer.  Contemplation is simply being in the presence of the one Whom we love.  It is a way of praying that can be done by everyone, at any time.  It is in one sense, the highest form of prayer because it reveals the meaning of all prayer; prayer at root is communion with God.  For this reason (using our distinctions among means, ends and fruits) we can say the prayer is an end in itself.  Due to its many fruits, we too often are bewildered by forms of prayer other than those of petitions because we mistake prayer fruits for ends, and prayer itself is seen as a means rather than an end in itself.

However, prayer rightly approached has the power to transform us (in all of its various forms and expressions) because in it, we come intimately into communion with Our Lord.  Communion is defined, though, by a relationship of love and love is selfless-giving.  God first invites us to this communion and when we reciprocate and to the degree with possess ourselves, we will increasingly become more like our Master.  However, our need for self-mastery, self-possession and active participation with grace is fundamental.  Prayer is an intimate path to holiness that presupposes a life of virtue and frequenting of the Sacraments.

Jesus prayed always.  His constant communication with the Father reveals to us who He is and simultaneously, who we are called to be.  Our prayers of petition and intercession are not attempts to get God to bend to our will, they are acts of self-surrender in which we express our needs, hopes and desires but realize in the very request we are resting in the arms of Him Who wills an even greater good than we can imagine.  As with the example of Our Lord Jesus, all of our prayers of intimate communion are ended with the caveat He taught us in the garden, not my will but thine be done.

Prayers of thanksgiving and praise are affirmations of the truth of Who God is.  They are ways of giving ourselves to Him in truth and love.  They transform us because Truth Himself transforms us when we give ourselves in love.

There is an intimate connection between the Cross and Christian prayer.  Jesus Christ, in the most profound act of total Self-gift, returned Himself to the Father in trust, thanksgiving, and in love on the Cross, something Adam and Eve refused to do (and we also do when we sin).  He manifested in the most profound way, this communion He always had with the Father.  It is fitting during this season in which we commemorate His Passion that we endeavor all the more, to grow in intimate communion with Him and His Cross through prayer.  But there is another way we can and must work on giving ourselves to God, that is by giving ourselves to our neighbors.  We will discuss this in our final installment of this Lenten series: almsgiving.

Fr. James Altman's recent video telling Catholics they cannot be Democrats is becoming a point of contention within the Church . It is a... END_OF_DOCUMENT_TOKEN_TO_BE_REPLACED

As the world races to find an effective vaccine to defeat the COVID-19 pandemic, and even before we know if we will have a... END_OF_DOCUMENT_TOKEN_TO_BE_REPLACED

The Catechism of the Catholic Church's (CCC) very readable discussion of contemplative prayer should remind us that it is not just for certain temperaments... END_OF_DOCUMENT_TOKEN_TO_BE_REPLACED