Heaven or the Proscenium Arch? 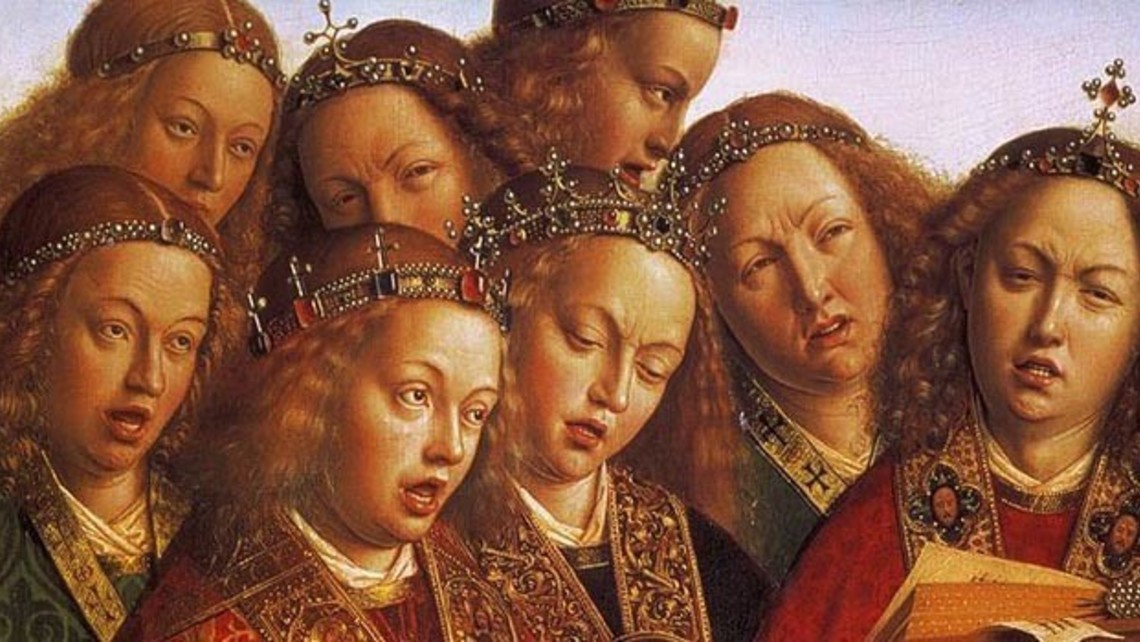 If evangelization is at its core, bringing Jesus Christ to other men then it makes sense that the Eucharist must be the center of evangelization.  The term Eucharist though is based upon a verb, thanksgiving.  This is in fact what the Sacrifice of the Mass is, it is the ultimate act of human thanksgiving made efficacious for salvation by a Divine Person.

The Mass brings each Christian into a concrete encounter of communion with Jesus Christ in history and in eternity; it collapses all of salvation history and time into a sacramental event located at one point in space and time.  It is the sacramental presentation of the eternal return of the Son to the Father, a return which He manifested in time in His Passion, Death, Resurrection and Ascension back to the Father.  This is what we must be led to experience at Mass.

There are essential aspects to the Mass in order for it to be valid and there are accidents that, while not necessary for validity, are of supreme importance for the liturgical experience to properly form the Christian.  Such accidents include, among others, sacred art and architecture, the preaching in the homilies, the use of silence, the placement of priest, congregation and other ministers, and then there is liturgical music.

The hair on one's head is also an accident that does not change the nature of the person, but green hair does not conform to human nature.  Those who die their hair green do so in order to assert themselves and their wills over/against their human nature.  They do so by causing a distraction.  Any accidents introduced into the liturgy, however artistic, moving, or meaningful must conform to the nature of the  liturgy, or they will distract and possibly serve to undermine the efficacy of the Eucharist for those participating.

The nature of the liturgy as we indicated, is a recapitulation of salvation history made present in order to incorporate each concrete individual into Christ and introduce him into the eternal exchange of Trinitarian love.  Each accident must serve to help one go out of himself, to transcend his earthly existence and help him to realize that sacramentally he is also in heaven during the Mass.

Liturgical music is a critically important aspect of the liturgical experience.  Unfortunately, this is an area in which we still have much room for improvement in terms of helping liturgical ministers understand in order to foster a new evangelization.  We recently had the opportunity to attend an ordination in which the music was technically quite well performed, the final adjective being the operative term.

The music took on the flavor of a Broadway musical, as did the gesticulations of the cantor which were hard to miss because she and her choir were sitting under the Crucifix where the Tabernacle should have been.  This group clearly put much time, attention and practice into their preparation but rather than serving the Mass they, however inadvertently, became a distraction from its real center.  Rather than helping the congregation realize they were at once at Mass and in heaven, the music brought us to the proscenium arch of a Broadway stage.  Rather than assisting minds to lift affects in worship of the living God, toes were tapping among an "entertained audience."  Rather than being helped to realize we stood at the foot of the Cross, we were transported to the stage of Jesus Christ, Super Star.

What is appropriate liturgical music is a very sensitive area for many Catholics, but it is an area in which much reform is still necessary if the Mass is to serve more fruitfully, the new evangelization.  For more on this topic, see our article on The Liturgy and the New Evangelization.

Fulfillment and Healing through Surrendering to Christ

The Practice of Surrender for Overcoming Temptations

Let’s now turn our attention to the practice of surrendering ourselves to God. The... END_OF_DOCUMENT_TOKEN_TO_BE_REPLACED

A Process of Spiritual Discernment II - The Examen

We should all do a regular examination of conscience prior to going to confession. We should go to confession regularly; most spiritual guides suggest... END_OF_DOCUMENT_TOKEN_TO_BE_REPLACED

A Process of Spiritual Discernment I

St. Ignatius of Loyola is well known for his founding of the Society of Jesus, a religious order also known as the Jesuits. He... END_OF_DOCUMENT_TOKEN_TO_BE_REPLACED